The relative minor scale concept is simple yet very powerful and eye opening when you first grasp it. You can use it to write solos and improvise over most popular songs.

The Relative Minor for Guitar Soloing

What Is the Relative Minor and How to Find It?

Every major scale shares the exact same notes as a minor scale. Both scales are said to be relatives to one another.

To find the relative minor to any major scale just go down 3 half-steps. On a guitar, this is 3 frets lower.

Another way to approach this is to look at the 6th of any major scale to find its relative minor key.

In other words, a minor scale is simply a major scale starting on the 6th note. 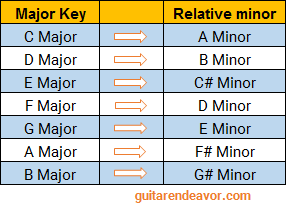 How Is It Different from the Major Scale?

This is because they each resolve on a different note. This gives them a major or minor sound.

Also, it will drastically change the way you approach your soloing since you will revolve around different notes.

Here is an example of this over a G major chord progression.

Relative Minor for the Guitar Player (Where It Gets Interesting!)

The difference in the previous example is subtle but when playing solos in a popular music context (pop, rock, blues, soul etc.) the relative minor is very handy. You can use it to find which minor pentatonic scale fits best with a major chord progression.

Playing the minor pentatonic version of the relative minor will give you a more rock and bluesy sound.

Using It to Write Solos for Basic Rock and Pop Progressions

When improvising, you have to know the key of the song before doing anything. But when playing around a fire camp this might not be clear and you could have to find it rapidly on your own. Fortunately, in a pop context, the first chord of a progression is most likely the root key of the song.

If it has a major sound to it, you can go straight to the relative minor pentatonic to improvise.

However, if it has a minor sound you would be better sticking to the root to play the minor or minor pentatonic.

When I first understood this I was frustrated I didn’t know this before! After all, this is such a practical concept!

Get the Backing Track

You liked this lesson and want to practice right now, you can get the backing track here

Let me know what you think or if you have any questions in the comments below.

Success! Now check your email to confirm your subscription.

The Practical Guide to Playing a 12-Bar Blues

What is a 12-bar blues? It’s a basic and simple chord progression. As its name…